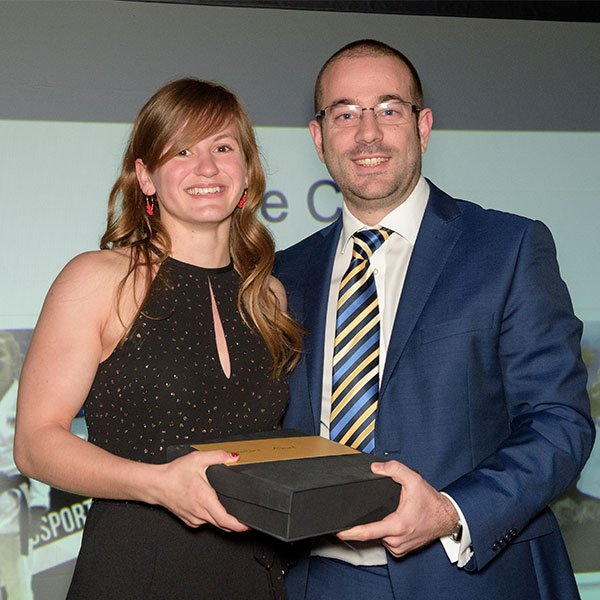 It has been a season to remember for the University of Wolverhampton which has been the most successful ever for our sports teams, writes Multimedia Journalism student Andrew Rigby.

This was the largest attendance for the Sports awards and gave the athletes, coaches and special guests a chance to celebrate, relax and enjoy all the wonderful achievements of this year. It also marks 100 years of British Universities and College Sports (BUCS) which has come a long way since it was set up in 1919.

The 2019 Sports Awards were held at Wolverhampton Wanderers FC’s Molineux Stadium which was a fitting setting to demonstrate the success of both the University and the success Wolves have had in their first season back in the Premier League. The evening began with a few words from Dr Richard Medcalf who is Director of the Institute of Human Sciences. 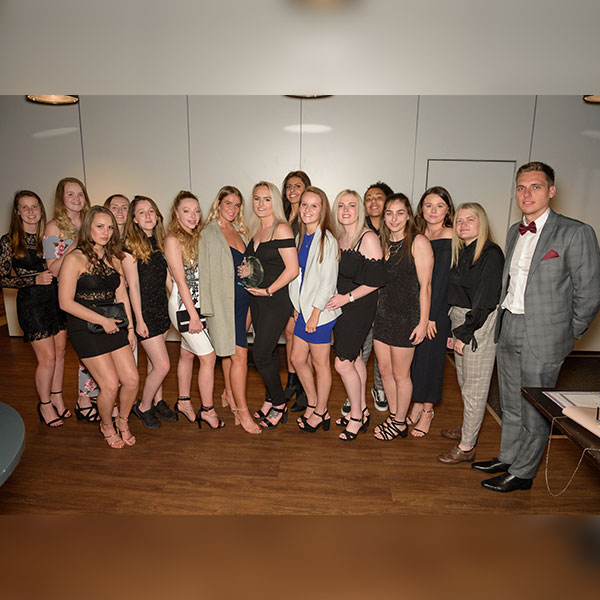 Richard said: “The success of sport at the University is built upon partnership.

“Our achievements are only possible thanks to a team effort with students, staff, coaches and volunteers all working to support our teams.” 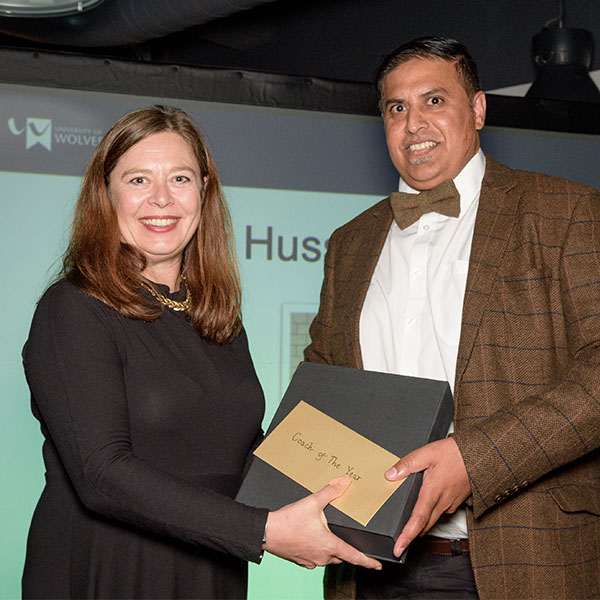 Returning to host the awards was Lynsey Hooper, a successful Sports broadcaster who has worked for BT, BBC, ITV, Sky Sports, Eurosport, TalkSPORT and IMG as well as co-founder of The Offside Rule podcast which has been listened to over half a million times.

Lynsey said: “I think the sports department at the University of Wolverhampton just keeps on growing and getting better with more success particularly with BUCS and so lots of teams wanting to celebrate and so I expect it to be quite raucous, quite loud and lots of pictures on social media.” 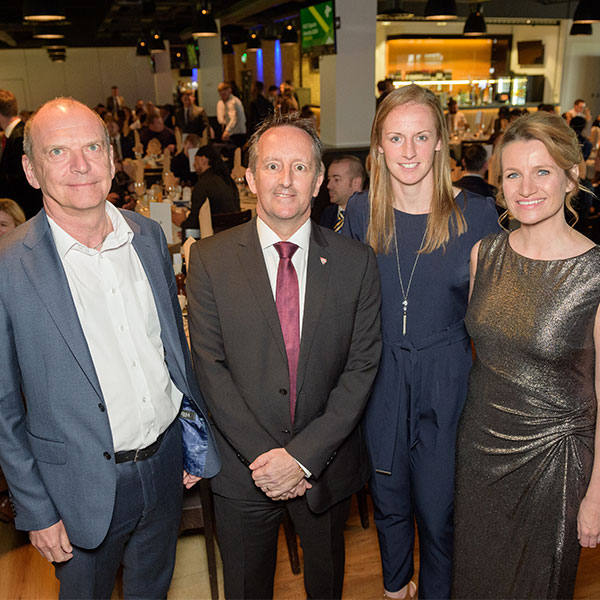 The first award of the night was the Excellence in Volunteering award which was presented by University graduate, Jamille Matt who helped Newport County in their incredible FA Cup run which only came to an end at the hands of the mighty Manchester City. The awards went to Amar Akhtar – Jeram, Jodie Caller, Chloe Chapman, Geovannie Shaw, Ben Maitland, Lewis Wood and Charlotte Brown.

The award winners for the Half Colours award went to Sandra Hewakowski, Sophie Masterson, Guyguy Maboy, Sam Tonks, Dan Okojie and Lowri Walker. Then we had the Full Colours award which went to, Molly Storey, Jemima Yeats-Brown, Faye Njie and Jodie Caller. 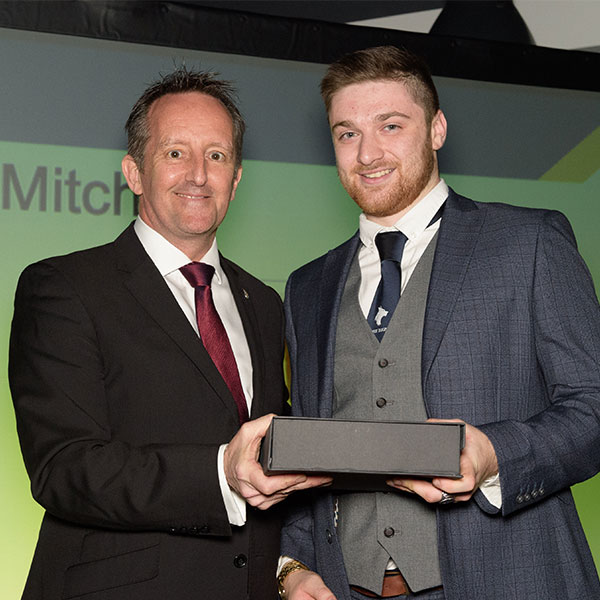 During the awards, Kerys Harrop who is Birmingham City Football Club’s Women’s captain and a graduate of the University, and Lowri Walker who is the Women’s football ambassador and plays for Wolves Women gave great interviews and a great insight into Women’s football. Formula 3 Racing Driver for the University of Wolverhampton Racing team (UWR), Shane Kelly, who in his career has won 27 podiums, gained over 1000 points for the team and achieved 6 fastest lap times.

We then proceeded after a break to the Club of the Year Award which went to the Men’s WLV Football and Futsal Club. Amar Akhtar-Jeram then picked up his second award of the evening as he won the Sports Volunteer of the Year Award for his dedication and continuous hours he puts in for the WLV Men’s First Football team. Coach of the year went to Men’s Futsal’s Ikhlaq Hussain who guided the team to a second successive promotion campaign to promote them to Tier 1 and they also secured the Conference Cup in a memorable season. In an interview he said: “When we set a target at the beginning, we go out to win it!”

The final awards of the evening started off with the Captain of the year award which went to Men’s Rugby team James Mitchell who was a key part in the team winning promotion to Tier 4 and reaching the Semi Finals of the Plate Cup. The next award was one that is not handed out every year, which was the Wolverhampton Sport Director’s award, w hich was won by Jodie Caller for her outstanding contribution and commitment to Judo.

One of the most anticipated awards of the evening was the Team of the Year award which was presented to the Women’s Football team after they finished the season unbeaten, winning the Midland’s 2a league which secured their promotion to Tier 1 and winning the Conference Cup which is an incredible U – Turn in form compared to last year when they were fighting relegation which is testimony to the team’s incredible hard work and their new Coach James Dale.

Finally, the last award of the evening was the Sports Personality of the Year award in which all three nominees were from Judo but the winner was Jemima Yeats-Brown who sadly couldn’t be at the awards so sent in a video which was played on screen. She is the British Judo Champion, finished 5th in the Paris Grand Slam, won bronze in the Tel Aviv Grand Prix, ranked number two in the Senior GB team and will hopefully represent Team GB at the 2020 Tokyo Olympics.

During the evening everyone was encouraged to tweet their thoughts and pictures to #WLVSA2019.

Despite the University only having 12 teams they are ranked in the top 80 in the BUCS rankings which is an incredible achievement and the goal is to only get better and better as the years go on. I will finish with what I think is a fitting quote from Dr Richard Medcalf on the night: “Your best is yet to come.”

Here’s to another successful year of sport for 2019/20 season!