Why the Wonder of Wales?

Wales in the semi-finals of the Euros. One game away from the final and playing against a team that is yet to win in normal play. Why have Wales been successful?

Success is not a chance event. It starts with belief. Belief that you can achieve, belief that you will invest effort until that chance of achievement no longer exists. Wales started with a strong sense of belief that they could get out of the group stage. Three teams went through and Wales knew that they had a world superstar in their team who could do brilliant things and help produce goals.

Wales also knew that they would work hard, that players knew their roles, and that unless they worked hard, they had little chance. Gareth Bale’s brilliance required everyone else to work very hard and to concentrate. And so in the first game Wales won 1-0; England drew. 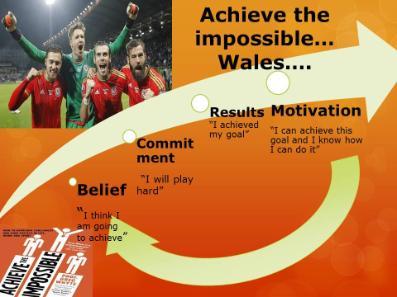 Belief in the dream was now reinforced by results and from results came increased motivation; “We can do this, we can really do this – It’s possible.” After a last minute defeat against England we then saw Wales play with intensity against Russia and win comprehensively.

Wales defeated Northern Ireland; a match they would have had a strong belief in winning and then achieved the impossible against Belgium, one of the fancied teams. Whilst the bookies and pundits looked at the form guide and expected a Belgium win, maybe the Belgium players believed this also; the Welsh team played with intensity and passion. A team that has not reached a major competition facing its last game and so determined to enjoy that game and if they played with passion, then they would leave with their heads held high. The result speaks for itself; a comprehensive victory.

Can Wales beat Portugal? Of course, if belief starts to wane, they should look to the example of Leicester’s Premiership win, or Greece’s 2004 victory in the same tournament. Why not England? England seemed to lack belief, lacked a plan to deliver their goals, and the draw against Russia seemed to confirm low beliefs and uncertainty in method. England needed a player to inspire, but Harry Kane looked off form, Raheem Stirling short of fitness, and other than flashes of excellence from Vardy and Sturridge v Wales, England lacked incision. And so we saw lots of passing sideways in the hope of doing something special, but nothing special was planned. Wales had Bale, and could plan for his brilliance at free-kicks. England, without a Bale, could have planned excellence at corner kicks, or at throw ins so to bamboozle the opposition with fast running but simple play. Iceland did it against us, after all.

Back to Wales… we have all found out our long lost Welsh relations and have a sense of being British. The lesson learned should be to believe in yourself, plan a strategy of how to deliver those beliefs and then act out that plan. Sounds simple, but it’s easy to overcomplicate matters and confuse a simple plan with a lot of unwanted thoughts and emotions.